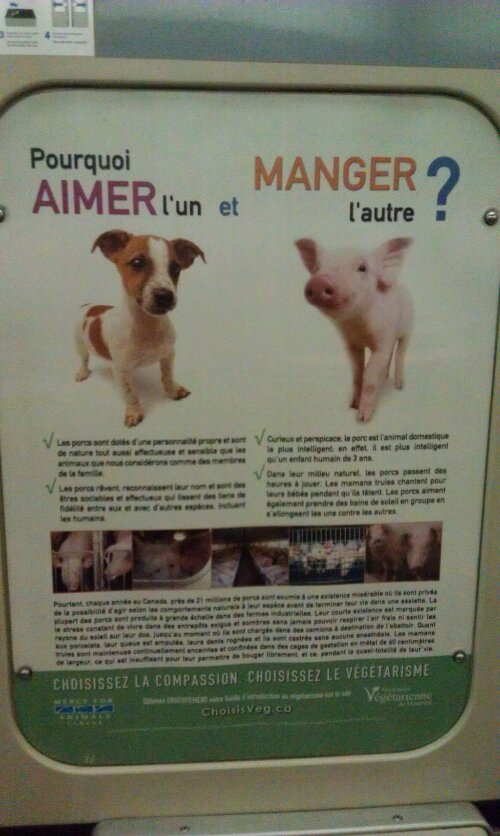 So there is this poster in the metro (or the “tube” for the imaginary British people who read this blog) put there by some vegetarian organisations. For those of you, my dear imaginary readers, who so not speak French, this reads “why love one and eat the other?” And for the first time in my life I realised that the “no-meat-weirdos” do have a point. We save way to many stray and homeless dogs in our society. Every day on my way to work, I happen to ignore a homeless guy with a cardboard sign that says “HOMELESS AND HUNGRY.” I ignore him for two reasons: one, he uses all caps and the protocol clearly specifies that means he’s yelling at me and I don’t respond well to GETTING YELLED AT, especially not at 8 freaking o’clock in the bloody morning; and second, because he is always smiling and I don’t trust those smiling pricks, not one bit. No, sirree, Bob. What the FUCK has he got to smile about? He is homeless and he is hungry. Meanwhile, I am sitting in my air-conditioned Ford Escape, full of misery and despair because world is shit and there are homeless and hungry people out there.
But I digress. So the veginazis finally have a point and way to many fucking strays are still alive. We should stop this prejudice and feed them to the homeless people. That way we kill two birds with one stone: we stop those really annoying SPCA commercials and we get homeless people off the intersections where they annoy the 9-to-5’ers with the cheerfulness.
I say, “STOP THE HUNGER. BRING YOUR UNWANTED, HOMELESS ANIMALS TO THE FOOD SHELTERS.” That’s right: you too can do your part in fighting hunger and homelessness. Your new condominium does not allow pets and Toto can finally be a productive member of the society instead of the usual drain on resources he has always been.
Who’s with me?